﻿
﻿
﻿ ﻿ Florida native Robert Enriquez is President and owner of Red Baron Picture Corp. and Red Baron Management. He began his career as an actor in regional theatre, feature films and television before going behind the career to produce, direct and management talent. His latest project will be to adapt Emily Skinner’s 2001 novel MARQUEL to a screenplay. Robert hired Emily’s daughter, Marquel Skinner, in 2011 as Unit Production Manager and to act in a small role in his film 3 DAYS IN MAY. Impressed with Marquel’s drive and talent, Robert signed the actress to his Red Baron Management division. It was late 2011 that Marquel shared with Robert her mother’s novel of the same name, MARQUEL.

Emily Skinner, a protégé of Florida’s pulp legend, Harry Whittington, penned the novel in longhand after Whittington blessed the plot weeks before his death in 1989. Emily had set a goal as a 15-year-old to name her first daughter Marquel and write a book with the single name title. It wasn’t until she met Harry Whittington and interviewed him for a local beach newspaper that the story began to take shape and a friendship developed. She learned from this prolific author of nearly 200 novels and screenplays how to plot and write a chapter a day. Emily wrote the novel and shelved it until 2001 and published it in paperback when Marquel was 15 (it is available in print & on Nook & Kindle). Now as an empty-nester, Emily is writing a young adult paranormal novel with her younger daughter’s name, Blair, titled “St. Blair, Children of the Night,” and a sequel to “Marquel.”
Marquel Skinner will star in MARQUEL. She found her passion for acting after finishing a Bachelors degree in Criminology and English at the University of South Florida. Her younger sister, Blair, an aspiring director, used Marquel for a couple of her student films. Realizing how much she loves acting, she attended a Sunscreen Film Festival workshop with the casting director for Twilight (Lana Veenker) and began working with acting coach (Peggy Sheffield). Marquel’s work includes theatre, commercials, student, and films. In 2011 she won the 2011 Suncoast Theatre Award for her role as Toni in “Cactus Flower.” She now resides in Burbank, California and is pursuing a career as a working actor.
﻿
﻿Blair Skinner will co-produce MARQUEL. Blair was St Petersburg College’s 2009 Winner for Best Direction for her film noir titled, “Three’s A Crowd.” Skinner interned for Last Call with Carson Daly and E! True Hollywood Story before landing her first film job with the Oscar Winning “The Help.” She met Brunson Green at a Sunscreen Film Festival 2009 Q&A. It was her persistent follow-up with Green that landed Skinner a job on the 2010 Dreamworks Film. In 2011 she invested some of her (“The Help”) earnings to make her first professional short film “Relative Eternity” while also working as a production assistant for Oliver Stone’s “Savages” (to be released summer of 2012). In her spare time she co-wrote and directed a pilot for a new comedy series “Pleasant Pastures.” She resides in Hollywood.
Please see our facebook page  http://www.facebook.com/MarquelTheMovie
Posted by Emily W. Skinner at 9:08 PM No comments: 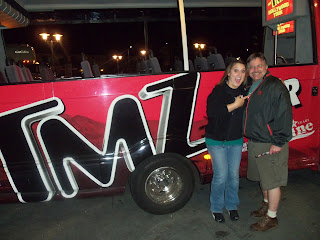 TMZ Cast member Jen and my husband, Tom (a major TMZ fan)
On our annual Spring Break visit to see our daughter(s), it was priority one that Tom take a ride on the TMZ bus. We didn't spot any celebrities on the tour and I was a little surprised Jen didn't ask if we had spotted any that day, given that is good content for TMZ, because we actually dined at a lunch spot where the cast and star of Castle, Nate Fillion, were out celebrating the Fillion's birthday at a table in front of the cafe (not on the tour route). How did we know it was Nate's birthday? They were discussing it in earshot. Tim Roth of "Lie to Me" was also dining at a table inside and I've got to say, it's more fun to be among "them" than stalking them. I rank it right up there with seeing a coyote climbing the hillside of the Hollywood sign. We had hiked up to see the Hollywood sign earlier and our oldest daughter pointed out the stray coyote (not to be confused with Wile E. Coyote) because this little guy was on all fours and less animated. We do have random coyote sightings at home in Florida, but it's always one of those news stories about how domestic pets go missing.
So Nate and Tim you are my coyotes, beautiful animals to observe and watch, but not disturb. Not that I think you would harm our pets, but I'm not getting close enough to find out.
But regardless of the fact that we didn't see celebrities on the TMZ Tour, it was a fun 6:30 pm ride through Hollywood and Beverly Hills. Thankfully the folks at TMZ had blankets on the open bus as it was cold out. We learned that TMZ refers to the Thirty Mile Zone that is the center of Hollywood and spans a radius of 30 miles and was used to determine how extras got paid in the early days and I believe how the unions determine some of the current wages.
The tour mixes stops where infamous/famous moments occurred and intertwines video clips to keep you from getting bored. Traditional sightseeing tours depend on the guide to keep you interested, but since this is show oriented, we get to watch TV periodically and ride, almost like a bunch of kids watching a DVD while dad drives the family across country (or part of L.A.). Naturally we're playing a road game "who can spot the celebrity" on the side of the road or driving by, but bunch-buggy would have been more successful on that evening.
My only goal was to see my teacher husband enjoy being part of his favorite 7pm after work habit. Jen was gracious to take a picture with Tom and that was a mission accomplished moment. The only way it could have been better is if Harvey made an appearance or Shaq had stopped our bus! Where is a giant athlete when you need one?
Posted by Emily W. Skinner at 7:28 PM No comments: