St. Blair: Children of the Night set for All Saints Day release 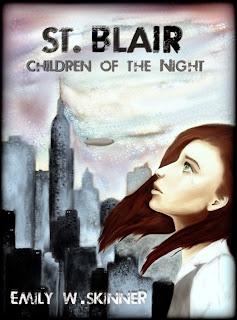 Sybille Malone lives in an overpopulated Manhattan, Region One, of Global Good 2202. Their society is the fulfillment of utopian ideals developed by the surviving masses of 2100. Seventeen-year-old Sybille is a resident of Dayshift and longs for a Nightshift boy known only as Mark.
Distraught by Global Good's restrictive culture, Sybille is desperate until she finds a relic of a past civilization. The discovery of Blair's diary sets off a chain of supernatural events that not only effects Sybille's close relationships, but has Global Good scrambling to find the culprit.

________________________________________________
After 3 years of writing, I've finally uploaded this novel to be appropriately released on All Saints Day, tomorrow. I sure hope the upload goes well, I'll check in a few hours.
This novel is named after my youngest daughter, Blair. My first novel was named after her sister, Marquel.
Why did I decide to name books after my daughters? I don't know. It seemed like a good idea when I was younger, but it really adds pressure to the writing process.
Anyway, there are 2 more books scheduled in the St. Blair series and a sequel to Marquel. Both are underway and should be released in 2014.
Posted by Emily W. Skinner at 7:03 PM No comments:

Film festivals are like sales conventions, you spend 3 or 4 intense days at nonstop workshops and in the case of festivals, screenings, without eating or eating junk, because you don't want to stop and miss anything. Plus there are late night networking events and parties, so sleep is sometimes left to an occasion nap during a screening. That is such a bummer. Because I will fall asleep in a great film to discover the end without the middle. But thankfully, my naps are few.

I'm glad I only do a few a year, but I would definitely change a few things if I did a circuit.

First, there needs to be a stand, like they have for runners, where water is distributed for people going to multiple events. Maybe even spritz our face? Not to mention we need chocolate and coffee here and there. I really wouldn't mind a peanut butter and jelly sandwich for a pick-me-up or low salt trail mix.  Afterall, I am supporting the filmmakers and sharing my honest feedback or sincere appreciation through social media and Q&A. A little nutrition makes for more intelligent questions.

Next I would make sure facilitators remind the filmmakers to repeat questions asked by the audience, and then answer by actually speaking into the microphone. Most often the microphone is somewhere between the navel or folded arms and we audience members get remanent sound. Meaning whatever that mic MIGHT capture as the filmmaker gestures during the reply.

Please stop by and say hi!
Posted by Emily W. Skinner at 1:28 PM No comments: