Our youngest, Blair, is the filmmaker and screenwriter. She has made wonderful connections in Hollywood and landed great jobs on The Help, Savages and most recently NBC's 1600 Penn starring Bill Pullman.

Blair and her business partner Amy K. Green formed GreenSkin Productions in 2012 and created a comedy pilot Pleasant Pastures as well as a new webseries Stand Up Girls that will be featured on the show's Facebook page soon.

Stand Up Girls features 3 female stand up comedians with horribly misguided outlooks on life.
See www.facebook.com/standupgirls or their website http://www.standupgirlsshow.com/# 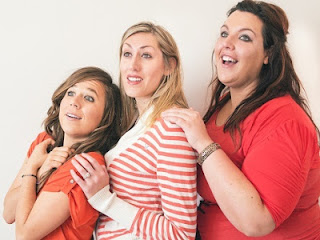 The characters are left to right:
Harper - Hyperactive, optimistic, and an avid collector of worthless art. Harper makes a living as a magician's personal assistant in . She is an amazing story-teller if and when she can stay focused on stage.


Delores - Large and in charge Aussie with a penchant for pissing the world off without noticing. Dolores' stand up routine is in your face, oddly sexual, and occasionally offensive.
So where does Blair get her inspiration?
See Blair's Twitter Profile Picture
Yes, she's the one in the middle.
Follow her @themoviechic 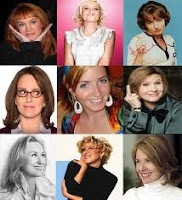 Posted by Emily W. Skinner at 7:40 PM No comments: