Part 3 - My Author to Screenwriter Journey


Why I am doing it
Before I explain why I’m writing a screenplay.
Let’s go back to the beginning.
At 20, I bought a Smith Corona typewriter at a garage sale and made a career choice. 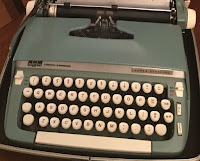 I was going to be a working writer. In fact, the next Erma Bombeck.
With my poetry phase behind me, I was ready to write a body of work.
To give you an idea of my skill set. I quit high school at 16 and went to night school while also working full time at a local carwash to help support my mother and younger siblings.
High school for me was after work with a lot of moms and dads, immigrants and people who decided to go back to school after dropping out.
To my credit, I finished on time when my peers (who went to high school in the day) did.
I didn’t feel I missed out. Rather I enjoyed not being in the company of teenagers, though I was one.
I was a go-getter. -- Eventually hired away from the local carwash to become a detailer for a local Saab and Subaru dealership.
Funny, I was so green that I didn’t even know I was negotiating my salary when the car dealer asked what I made at the car wash. I said, “I can’t afford to leave here.”
The day I bought that typewriter I knew I needed serious help. Grammar and structure were/are my weakness. Not story.
I have ideas.
Anyway, I signed up for every English and writing class the local junior college offered. Not because I wanted a degree, I wanted to write!
My college creative writing teacher, God love her, said I had a “certain naivete.” Which I took as a great compliment. I didn’t look up the definition. In fact, I was sure it meant gifted.

She had me. Clueless -- and fearless! So much so, I sold articles to the local weekly newspapers.

Ten dollars and a byline. Sign me up.
With my growing portfolio, I eventually moved up to stringing for the dailies. The big time.
Sure, I heard remarks about my writing, but they still accepted my stories and corrected my work. Made me look good.
I was getting noticed!
How do I know? The editor came out of his glassed-in office to the newsroom floor, paper in hand and screamed, “why is the stringer writing everything? What am I paying you to do!?”
Apparently, I was invisible. I was out in the open. He’d made his point, turned and stormed back into his display case.
So why am I screenwriting now?
Because I have a certain naivete.

To sign up for emails or purchase books www.emilyskinnerbooks.com
Posted by Emily W. Skinner at 6:08 PM No comments:

Part 2 - My Author to Screenwriter Journey


How I decided to do it


ACTION
The first draft of the Marquel script was written by Amy K. Green, my daughter Blair’s producing partner. Amy spun my novel into an edgy movie she would want to see.
I really liked her snappy dialogue and scene progression. However, I felt my characters weren’t themselves. – After all, I am their mother! I know them better than anyone.
Amy agreed I could use her version as a template to rewrite and organize the book into a screenplay I was comfortable with.
Collaborate.
I also wanted to keep some scenes that were uniquely hers.
I started by buying the iPad version of Final Draft (screenwriting software). I didn’t know how to use it, but I got the hang of it over time.
When I originally wrote the book, I saw it as a movie in my mind. Each chapter had cinematic progression. Even now, if I hear a certain song, the Play button goes off in my brain. I can see my book as a movie.
After several drafts, we all agreed the screenplay should be sent for script coverage. We liked it, but it needed an outside perspective.
I knew what script coverage was, because Blair did coverage for Penny Marshall’s company, Parkway Productions. Basically, coverage summarizes a script for a production company’s consideration. The script will get a grade of Pass, Consider or Recommend.
I later learned in a workshop that roughly 96% to 99% get a Pass, maybe 1% to 4% a Consider and anyone that Recommends, is usually fired.
Literally.
“A good script warrants a Consider, but you better have a damn good reason why you’d stick your neck out for a Recommend!” --The words of a working screenwriter, not mine.
To save money, I entered a film festival screenwriting competition. Fee around $50. It included coverage. Coverage can be in the hundreds, depending on the experience of the reader.
I made top 12 of 125 scripts in the contest. No prizes, but good encouragement.
The biggest complaint. Sloppy formatting. And I used industry software!
Talk about embarrassing.
Okay, I can work harder. The story was solid. Not perfect. Now I have notes.
Notes – the film industry term for feedback.
Around the same time, I was writing the book sequel to Marquel, titled Marquel’s Dilemma, when I realized a big difference in book and film opportunities.
A novel can be self-published.
An author can write, hire a proofreader, editor, designer and marketer to launch a book, but a film requires a team. And, the writer isn’t important after the screenplay is approved.
The producer is the head of the film and can fire the screenwriter (of the approved script) and start over if they deem necessary.

Thankfully, I have daughters who are producers.
I don’t think they’d fire me?
Next week - Why I am doing it

To sign up for emails or purchase books www.emilyskinnerbooks.com
Posted by Emily W. Skinner at 3:14 PM No comments:

My Author to Screenwriter Journey


Starting the Process
In 2012 my daughters made a book trailer for my novel Marquel.
https://www.youtube.com/watch?v=6e6O7iYqeVQ
The girls worked with industry friends to hire a name actor.
Eric Roberts was our choice.
But before they could hire him, they had to prepare a book trailer script, agree on the length, location, story board, actors, crew and budget.
My oldest daughter Marquel played the character Marquel in the book trailer. My youngest daughter Blair directed her sister and Oscar-nominated Eric Roberts, who portrayed Zach Manning.
The book trailer was to jumpstart book sales, make the Marquel novel relevant and serve another purpose.
It would be both a book trailer and a movie trailer. Finding readers and eventually film funding.
As with any group project, we split into two teams.
Team Book Sales (me) and everyone else in Team Film.
I’ll admit, I was in both teams.
The original Facebook page was named Marquel The Movie. A little confusing. But hey, we were all excited, expecting the book trailer to go viral, sell hundreds of thousands of books and create a demand for the movie. As they say, begin with the end in mind.
The trailer released to two-thousand-ish views on Youtube in the first months of release. A major success to us.
The Marquel The Movie Facebook page, however, had little more than 100 likes. Our friends were talking on our private Facebook pages, through email and going to the Youtube page.
Within a year of the trailer release best selling author/screenwriter Lee Goldberg found us (on our Youtube page) and said, “Best book trailer I have ever seen.”

We were elated!
Even if book sales were few to flat, I was seeing new reviews on Amazon and other bookseller sites. Confident it would grow in time.
But the question our followers kept asking was, “When is the movie coming out?”
I figured if Team Film wants to make a movie, let’s go! Let’s do a Kickstarter.
Everyone said to me, “Whoa. Kickstarter!? The first order of business is you need a script. A really good script!”
All right, I said, “I’ll write a movie script.”
But how?
Next week - How I Decided To Do It

To sign up for emails or purchase books www.emilyskinnerbooks.com
Posted by Emily W. Skinner at 12:08 PM No comments: