It is easier to write a screenplay than a book. Well, that's my opinion.

I've written five books, a feature film, a television pilot, a half dozen short film scripts, as well as numerous newspaper articles. Each one required a word count/page length and a set of standards in the writing process. And yes, I have one short film in post production, Dough Nuts And More.

For me writing dialogue for a script is by far the easiest.

Because each page is one minute of screen time and 120 pages of mostly dialogue is less agonizing than taking a reader through a novel with multiple settings, character descriptions and twists. Well, you still need the twists in a screenplay.

Here are two examples from the script and book Marquel. 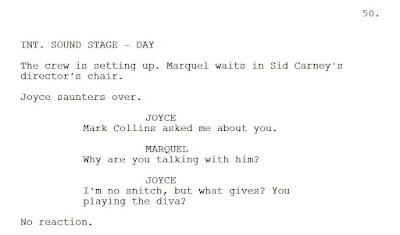 Most of us can write several screenplays in the time it takes to write a novel.

However, you have to complete something to know you can.

A bad 120 page script or 40,000 word novella can be reworked. My motto is finish what you start, no matter how bad you think it is.

Whether a book or script, it is easier to put plot points on index cards and rearrange them until you feel certain your story has a beginning, middle and end.

Once you have the outline, you can begin the writing process. For me outlining is a sentence or two about a chapter or scene. In screenwriting it is called beats.

I have written with an outline and without. Even if you know the end of the story, you'll feel like you are in a maze without an outline. Trust me.

I wrote two books in a TOTAL of 82 days with outlines, and three books that took several years without outlines. I had to try it both ways. I actually did outline later in the process of the three non-outlined books to keep my sanity.

The outline for Marquel's Dilemma (the 2nd book in the Marquel series), is now going to be the 3rd book Marquel's Redemption, because my characters were not cooperating during the book 2 writing process. The upside is I now have a 3 book series.

Know you are doing well when the characters take over the writing. They have a way of steering the story in directions you've not thought of.

With a script, it is okay if your characters don't go where you want them to, as long as they hit the beats and get to the plotted ending. Your characters always have better ideas than you do.

I can write a 1/2 hour pilot in 10 days. A short film in one day -- a working draft that is, not the finished product.

Once you have your screenplay complete, you'll want to put it away for a week or so before you begin editing and rewriting. You need fresh eyes.

Warning: you'll be amazed at parts and totally erase parts.

Next - Elements of Successful Screenwriting - Part 3

To learn more about my books visit www.emilyskinnerbooks.com